If you are having trouble using the system, please try our help guide.

5.1 The area crosses the administrative boundary of Cambridge City Council and South Cambridgeshire District Council. As a result, the planning policies of both Councils will apply, subject to any changes through the AAP process. Both Councils submitted their new Local Plans to the Secretary of State in March 2014 and these are going through Examination at the same time as this Issues and Options consultation. It is these proposed submitted policies and designations which are shown on the Planning Policy Designations Map below.

5.2 Both Councils have included a policy on the Cambridge Northern Fringe East area within their Local Plans; Cambridge City Council (Policy 14) and South Cambridgeshire District Council (Policy SS/4). Cambridge City Council’s policy identifies an ‘Area of Major Change’ and South Cambridgeshire District Council’s policy a ‘Major Development Site’. The policies propose to allocate the area for a high quality mixed-use development with a range of supporting uses, and indicate this jointly prepared AAP will determine site capacity, the amount and phasing of development, viability, and timescales and phasing of the development. Both policies are attached in full as Appendix 1.

5.3 Some further Local Plan policies on ongoing development management issues will still apply in the AAP area, and it is not proposed to state them in full in the AAP.

5.4 The county-wide planning policies that form the context for the AAP are set out in the adopted Cambridgeshire and Peterborough Minerals and Waste Core Strategy (July 2011) and Site Specific Proposals Plans (February 2012).

5.5 The Cambridge Northern Fringe East area and immediate surroundings is the subject of several adopted County minerals, waste management, and transport planning policies. Many of these are indicated on the Planning Policy Designations Map.

5.6 The waste management designations relate to the protection of existing waste facilities (Anglian Water’s Water Recycling Centre and Veolia’s Waste Transfer site); these seek to ensure that the future operation of this essential infrastructure is not prejudiced by future development, which therefore must be compatible with the existing waste management use. They also relate to finding sites for additional and/or replacement waste facilities in the area i.e. Household Waste Recycling Centre and Inert Waste Recycling Facility.

5.7 The transport designations focus on the retention and safeguarding of the strategic rail head and associated aggregates operations on the Chesterton Rail Sidings, and there is also a site identified for an aggregates rail head which could be used for a new railhead, or as a replacement for those existing. This site is at the eastern end of the Water Recycling Centre. Cambridgeshire County Council have also recently identified the additional need for the temporary storage of aggregates on the same part of the Water Recycling Centre to supply material for the A14 road upgrade over the next few years. 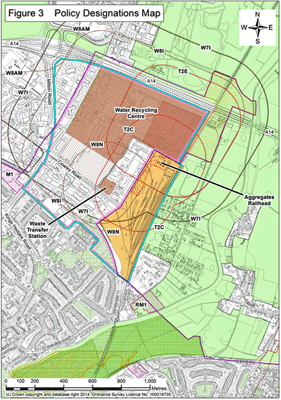 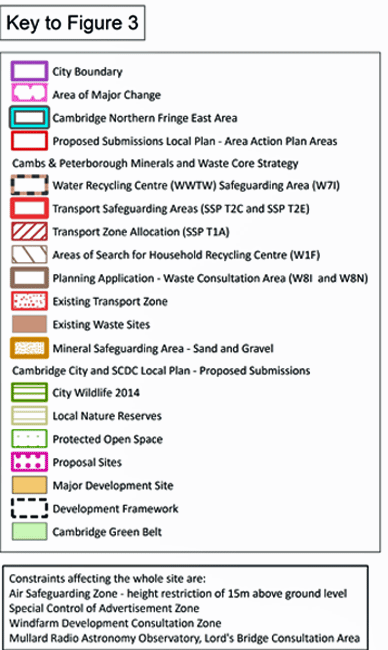 5.8 Cambridgeshire County Council’s Transport Strategy for Cambridge and South Cambridgeshire (2014) seeks to ensure that for current and future transport needs are met and that there are continued improvements to the accessibility of key locations, such as the city, stations and district centres. For the CNFE and its surroundings, a strategic aim of the Transport Strategy is to connect the area, including the new station, with other key employment sites. CNFE, Addenbrooke’s (Cambridge Biomedical Campus) and the west of the city are all examples of areas on the periphery of the city in need of greater connectivity and linkages, with proposals to achieve this via the creation of more orbital capacity, both for public transport as well as walking and cycling. In addition, increased permeability into the CNFE area for pedestrians and cyclists is prioritised, with improvements to the cycle network, for example through the ‘Chisholm Trail’, being key to this. Milton Road will also have focused public transport improvements, with the creation of a High Quality Passenger Transport (HQPT) option for this, and the other major Cambridge roads, planned.