1.1.2. The north-west end of Cromwell Road has historically been an area of mixed character with light industrial, manufacturing and employment land uses to the west of the street and residential to the east. The Ridgeons site was originally a timber yard. Neighbouring sites to the north included a tyre/exhaust garage, a BT engineering centre and a factory.

1.1.3. The Ridgeons site is the last of the primarily industrial estate land uses in the area, with all other sites to the north having now been redeveloped for housing. 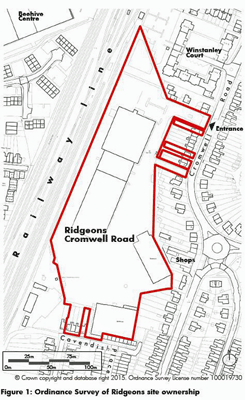 (4) 1.2.1. This document sets out the joint aspirations of Cambridge City Council and Ridgeons for the redevelopment of the Ridgeons Cromwell Road site. The aspiration is to create a well designed housing development, which incorporates market housing, affordable housing, public open space, pedestrian and cycle routes through the site and responds to the character of the surrounding area.

1.2.2. To this end Cambridge City Council and Ridgeons have prepared this Supplementary Planning Document.

(1) 1.3.1. A Supplementary Planning Document (SPD) is a planning policy document that supports policy in a local plan, in this case the emerging Cambridge Local Plan. SPDs fall into two categories: the first is policy supporting a city-wide objective, such as the Affordable Housing SPD; the second is policy for a specific site or area, such as this SPD.

1.3.2. This SPD is written in the form of a Planning and Development Brief to help guide the preparation and assessment of future planning applications on the Ridgeons site. As such, this document will form a material consideration, which will be taken into account by Cambridge City Council when determining any future planning application for the site. In addition, all proposals for the Ridgeons site will have to comply with the policies in the adopted Cambridge Local Plan 2014, once adopted.

1.3.3. This SPD has been prepared in line with the requirements of the Town and Country Planning (Local Planning) (England) Regulations 2012.

1.4.1 The Ridgeons site SPD is structured in four chapters:

1.5.2. The Local Plan is currently being reviewed and a replacement plan was submitted for examination by an independent inspector in March 2014. The emerging Local Plan allocates the entire site for housing (site allocation R12 - Appendix B, Proposals Schedule). The site allocation states the approximate capacity of the site is 245 homes, which equates to a density of 75 homes per hectare.

1.5.3. The proposals schedule included in the emerging local plan states that 'the site promoters will be expected to prepare a Planning and Development Brief for the site demonstrating how development will successfully integrate with the existing residential area as well as addressing the constraints and opportunities of the site. Scale, massing and density considerations in the design and disposition of new and existing housing will be expected to have regard to the character of the existing area'.

1.5.4. This SPD represents the Planning and Development Brief and provides greater certainty and detail to support the delivery of the housing allocation in the coming years. 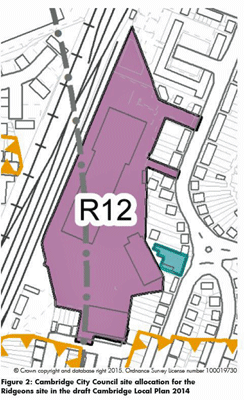 1.6.1. Cambridge City Council and Ridgeons have worked in partnership in the preparation of this Supplementary Planning Document (SPD) to ensure that any future redevelopment respects the surrounding area and takes full advantage of the opportunity for housing, public open space and new routes through the site.

1.6.2. The process of preparation for the SPD, including how the document fits into the Local Plan, is illustrated in Figure 3. The background preparation work for the SPD has been through two rounds of public and key stakeholder consultation in March 2015 and July 2015, which included exhibitions and workshops and online consultation through a dedicated project website. This consultation has shaped the key themes, development principles and the Framework Plan contained in this SPD.

The final version of this document will be amended prior to adoption to respond to the following: 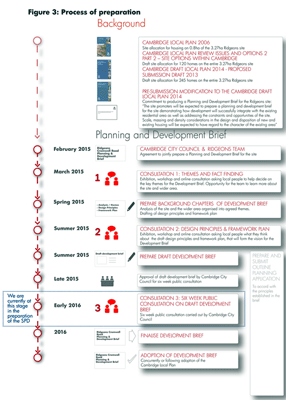 (1) 1.6.6. A Sustainability Appraisal and Habitats Regulations Screening Report has been carried out and consulted upon for the Cambridge Local Plan 2014. This consultation took place between 19 July 2013 and 30 September 2013. These documents will be available to view during this consultation. As the draft SPD supports the Cambridge Local Plan 2014, there is no further need to undertake a separate Sustainability Appraisal or Habitats Regulations Assessment for the SPD itself.

1.6.7. An Equalities Impact Assessment will also be made available during consultation, which includes updated information relevant to this SPD.

1.7. Status of the document

(1) 1.7.1. This is the draft version of the Ridgeons site, Cromwell Road SPD, is anticipated to be agreed for consultation at Development Plan Scrutiny Sub-Committee by the Executive Councillor for Planning Policy and Transport on 8 December 2015.

1.7.2. The SPD will be a material consideration in the determination of relevant planning application(s).