(3) 1.1.1 The New Museums Site (NMS), as shown in Plan 1 below, occupies a prominent location in Cambridge and has an extraordinary history as the historic centre of science in the University of Cambridge. Yet to some it is a disappointing place which, though it presents an attractive face to some surrounding streets, suffers from its piecemeal development during the first half of the 20th century, when the physical sciences grew exponentially, and from the ambitions of the post war era to address the resulting problems through comprehensive redevelopment and the imposition of an inappropriate scale. Future development on the site therefore offers an opportunity to create an improved, more coherent place and especially to improve the public realm on the site.

1.2.1 Proposals for works to the David Attenborough Building, (previously known as the Arup Building), were brought forward before the preparation of this Supplementary Planning Document (SPD) as they were focussed on refurbishment and internal alterations to provide enhanced space and public access for the Zoology Museum and to provide accommodation for those organisations which are a part of the Cambridge Conservation Initiative1. The work does however include some elements which will contribute to the aspirations of this document, such as the central facilities management base, (goods in/out), and the improvement of the street scene along Corn Exchange Street. These works are underway at the time of the preparation of this document and are due for completion in late 2015/early 2016.

1.3.1 This document sets out the joint aspirations of the City Council and the University for future changes through which it is hoped that a meaningful urban place, which celebrates the past, present and future, can be made.

(1) 1.4.1 The key issues and opportunities on the site have been identified as follows: 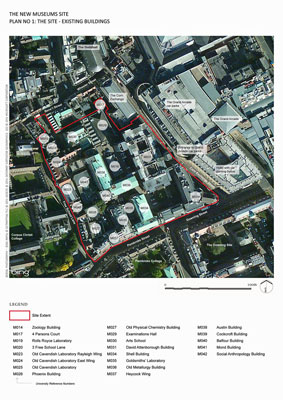 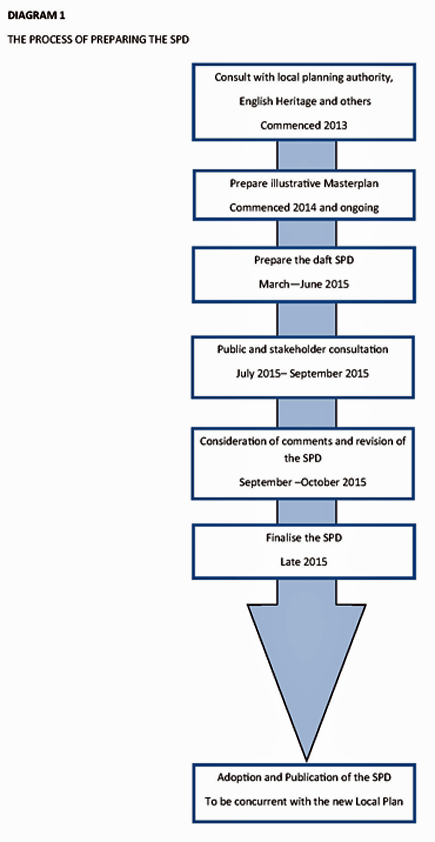 (1) 1.5.1 Cambridge City Council and the University of Cambridge have worked in partnership on the preparation of the SPD to ensure that any future development safeguards the architectural, urban, historic, cultural and archaeological importance of the site while providing an opportunity for positive qualitative change.

1.6.1 An SPD can be prepared to support policies and objectives found in a local plan. This SPD provides clear guidance on the City Council and University’s aspirations for the New Museums site. It is a framework which will help co-ordinate and guide future redevelopment of the site in line with the Council’s Local Plan policies. In particular, this SPD has been prepared to support Policy No. 43: University faculty development and site allocation U2 as set out in the Cambridge Local Plan 2014: Proposed Submission (as amended2). The full policy as drafted is set out in Appendix 1 of this SPD. The SPD has been prepared in line with the requirements of the Town and County Planning (Local Planning) (England) Regulations 2012.

1.6.2 The document has been prepared jointly by both the University of Cambridge and Cambridge City Council to set out what is expected in relation to the future re-development of the site. The purpose of the SPD is threefold:

1.7 Organisation of the SPD

1.7.1 The document is organised into two principal parts. The first seeks to describe and interpret the existing site from a variety of perspectives. The second describes the parameters within which future development should be brought forward. In each case the site is addressed both as an integral part of the wider city and as the major part of a defined urban block. Note that for the purposes of this document, the term “parameter” is only a general reference to a “framework” for change in respect of matters discussed in text and plan (access, entrances and public realm outside the site, proposed open space and the public realm, and built form). The term is not the same as that referred to in the Town and Country Planning (Development Management Procedure) (England) Order 2010, which applies to large scale proposals qualifying as "EIA" development.

1.8.2 There are a variety of ways to respond to the consultation:

1.8.3 The final version of this document will be amended prior to adoption to reflect some or all of the following:

1.8.4 This document will be subject to final consideration and approval by the council's Environment Scrutiny Committee before its adoption.

1.8.5 A Sustainability Appraisal Screening Report and Habitats Regulations Screening Report have been carried out and consulted upon for the Cambridge Local Plan 2014: Proposed Submission. This consultation took place between 19 July 2013 and 30 September 2013. These documents will be available to view during this consultation. As the draft SPD supports the Cambridge Local Plan 2014: Proposed Submission, there is no further need to undertake a separate Sustainability Appraisal or Habitats Regulations Assessment for the SPD itself, although screening reports have been completed and will be made available during the consultation.

1.8.6 An Equalities Impact Assessment will also be made available during consultation, which includes updated information relevant to this SPD.

1.9 Status of this document

1.9.1 This is the draft version of the New Museums Site SPD, agreed for consultation at Development Plan Scrutiny Sub-Committee by the Executive Councillor for Planning Policy and Transport on 16 June 2015.

1.9.2 Once adopted, the SPD will be a material consideration in the determination of relevant planning applications.