2.1.1. This section forms an analysis of the study area using historic map information to illustrate how the area has changed and evolved, and what factors have led to the form and appearance we see today.

2.1.2. Comprehensive redevelopment of the area commenced in the second half of the 19th century. In 1890, Victoria Avenue and Bridge were built in order to improve links between Chesterton and Cambridge. Victoria Bridge replaced the old Bates Ferry, which when it opened in 1895 encouraged middle class migration to new roads further north (Figure 7). The Portland Arms opened on Milton Road in 1839 and was converted in the 1880s into the Searle’s Hotel (Figure 13), it was later rebuilt in the 1930s when the old name was revived.

2.1.3. Further housing expansion to the north of Victoria Road and Milton Road took place in the first half of the 20th century (Figure 8).

2.1.4. The original Mitcham’s Corner premises were built in 1909 in the garden of ‘Bridge House’, the Mitcham family home, from which Charles Mitcham began his Chesterton Drapery Stores and operated from this premises from 1909 to 1977. The ‘Mitcham’s Corner’ sign above No. 34 Chesterton Road became a local landmark.  As time went on, the original junction was dubbed Mitcham’s Corner by motorists, the name later becoming associated with the 1960s gyratory.

2.1.5. A central island was introduced in the 1930s to try and solve the areas ever increasing traffic problems (Figure 10).  Extracts from newspaper articles of the time reported that Mitcham’s Corner was “something of a puzzle to road users not familiar with local custom’” but also reported that “the new system appears to be working well with the aid of two police constables – and there is every indication that, once it becomes familiar, it will be entirely successful “ (extracts from Cambridgeshire Daily News 6th Aug 1932).

(2) 2.1.6. Mitcham’s Corner was again transformed in 1967 when a new one way traffic system was implemented to relieve congestion.  At the time  around what was reported at the time as “Cambridge’s Chaos Corner”.

2.1.7. The 1972 Ordinance Survey (OS) map (Figure 9) shows the new block structure with the one way gyratory system and large garage on the Victoria Road island (the site of the current Staples Store). Norah Wolfe, niece of Charles Mitcham stated “ The original Mitcham’s Corner...has become a sprawling roundabout...it is still the heart of Chesterton, but is now so clogged with traffic what it undoubtedly needs is a triple by pass”.

2.1.8. In summary, whilst the Victorian era saw extensive redevelopment, what is notable from the historic maps is that Mitcham’s Corner has always been a key northern arrival point into the City and a natural convergence place for routes.  Old Ferry crossings that lined the Cam were later replaced with Victoria Bridge, and in the 1960s in the absence of the M11 and the A14, the radical one way system was introduced to cope with the ever increasing traffic travelling through Cambridge.

2.1.9. Today, the gyratory still dominates the image of the area, and the conflict between pedestrians and vehicular movements remains a constant issue. 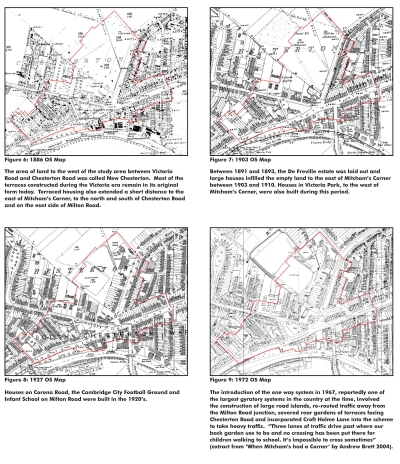 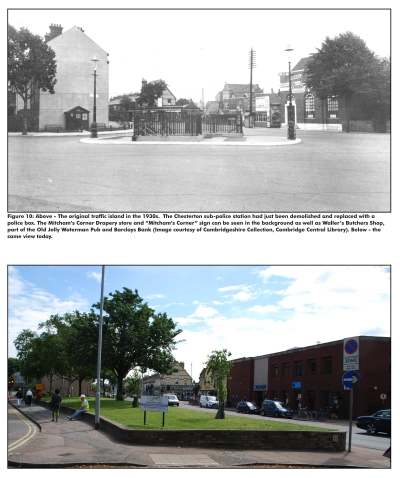 Figures 11 to 13: Historic and present day images of Mitcham's Corner 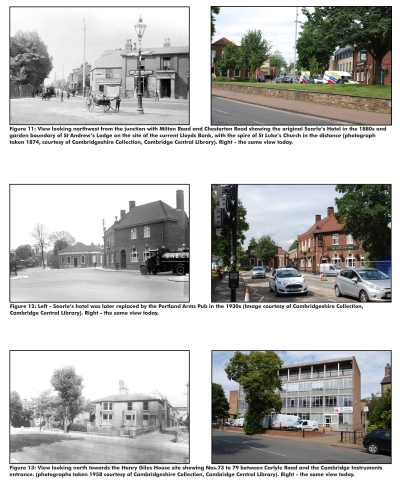 (1) 2.2.1. Figure 15 shows the existing scale and massing of buildings within the area.  The map illustrates the following key elements:

Figure 14: Photographs of existing scale and massing within the opportunity area 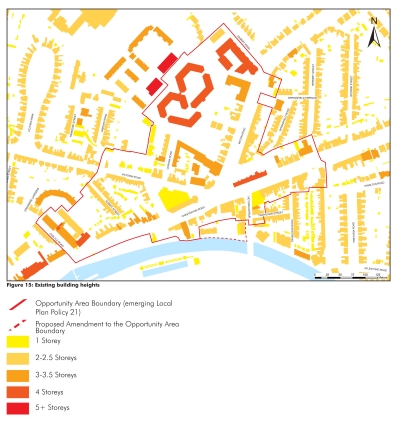 2.3.1. Figure 17 illustrates the broad land uses within the area.  Key elements are as follows: 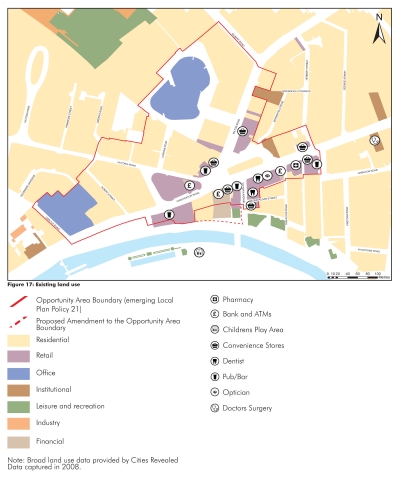 2.4.1. Figure 18 summarises the main constraints and opportunities to be considered for redevelopment within the area.  Key issues and challenges are outlined within the below SWOT analysis.