The Cambridge East Area Action Plan (AAP) was adopted in February 2008 with an objective to "create a new and distinctive sustainable community on the eastern edge of Cambridge which will enhance the special character of the city and its setting and is connected to the rest of the city by high quality public transport and non-motorised modes of transport."  (Objective B/a, page 5).  This plan was based on the assumption that the airport would relocate operations away from the area in the medium term. The document identified three areas that form Cambridge East:

(1) The document sets out aspirations for the area and objectives in terms of creating district and local centres, housing, employment, leisure and community facilities, and guiding principles relating to landscape, biodiversity, water strategy and sustainability.  The overall AAP concept diagram is included in figure 4.

(1) The document represents a long term vision for the area, however since its publication there have been a number of changes in circumstance, both local and national, including an announcement from Marshall's of its intentions to remain in Cambridge for the foreseeable future.

In November 2016 planning permission was granted at Land North of Newmarket Road for up to 1,300 homes, primary school, food store, community facilities, open space, landscaping and associated infrastructure and other development (S/2682/13/OL and 13/1837/OUT and identified as Phase 1 in the AAP). To the south of this site, Marshall as operators of Cambridge Airport, has committed to continuing airport operations for the foreseeable future.

(2) In addition, national and local policy has evolved, and new local plans are currently being prepared for both Cambridge City Council and South Cambridgeshire District Council. The plans were submitted jointly to the Secretary of State in March 2014 for independent examination. As part of the examination, a number of hearing sessions have taken place from 2014 to 2017.

Except as superseded by the emerging new Local Plans of both Council's, the AAP remains an important consideration in regard to the development of Land North of Cherry Hinton.

(2) Proposals for residential development will be supported if:

(1) The master plan should make "provision for a primary and secondary school, a local centre with a community hub, open space and a spine road connecting Coldham's Lane with Cherry Hinton Road."

This SPD is a planning guidance document which will support policy in the draft Cambridge City Local Plan and make reference to the South Cambridgeshire District Council. This SPD provides guidance for a specific site through the evolution of the associated framework master plan, referring to modified proposed policies within the emerging local plans.

(1) The LTTS supports sustainable growth across Cambridgeshire to 2031, encourages sustainable transport modes and efficient use of the network, and seeks to reduce the need to travel and the impact of transport on the environment. 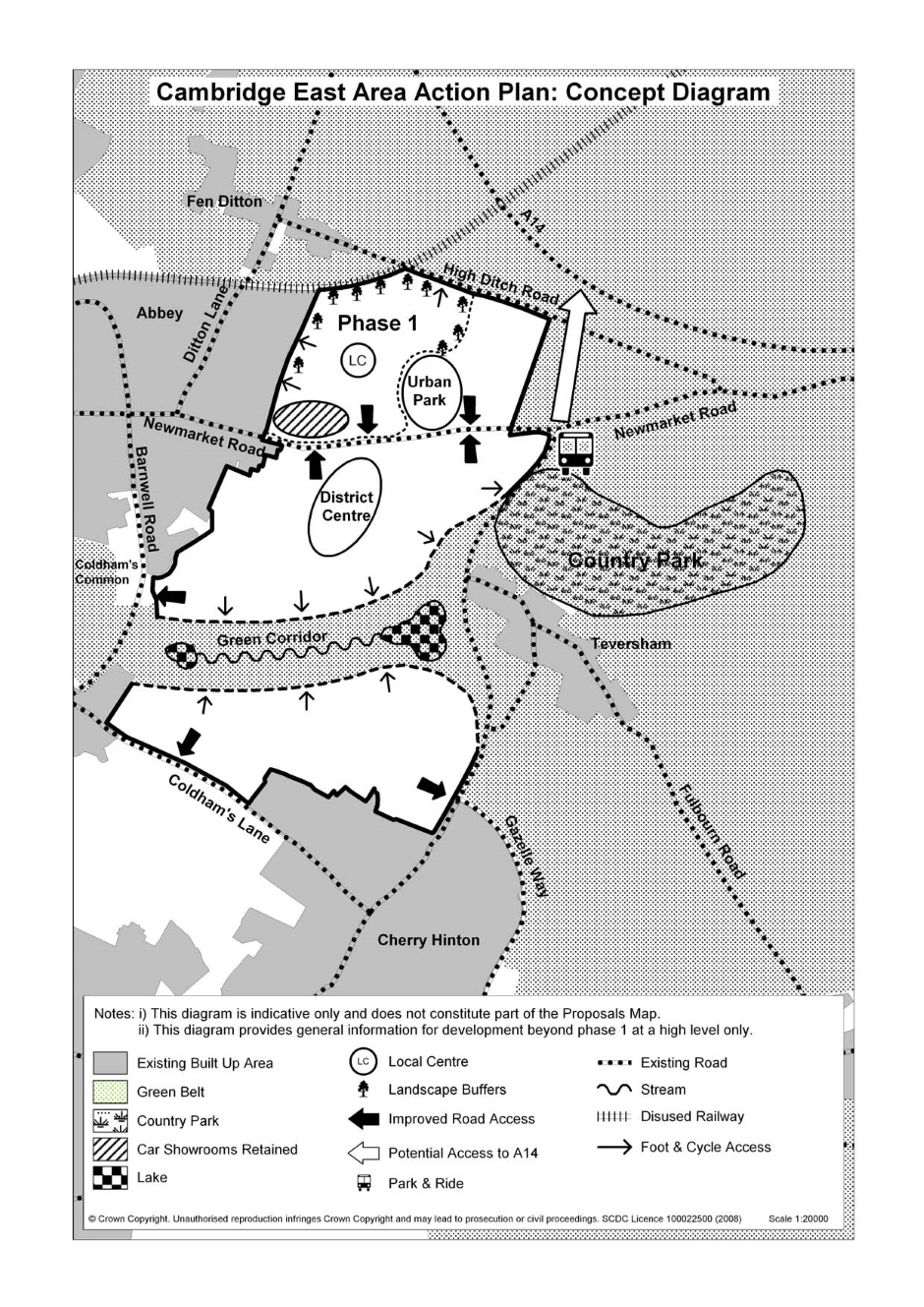 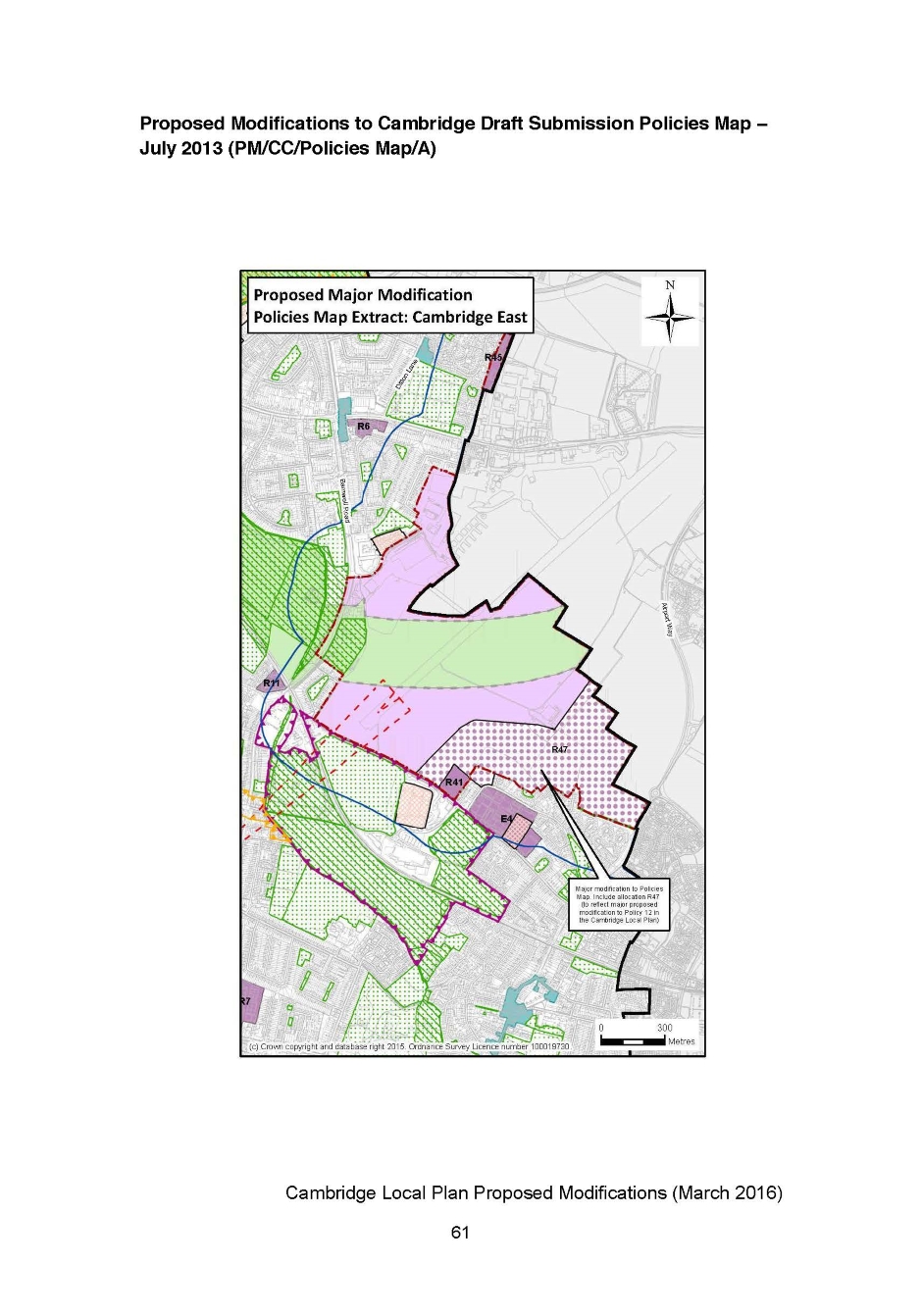 (1) The area to the north of the site is Green Belt.

Both the Cambridge and South Cambs Local Plan (respective submission drafts), state that the established purposes of the Cambridge Green Belt are to:

(3) The policy for Land East of Cambridge notes that the land has been taken out of the green belt, but reiterates that "the corridor of Green Belt running from Coldham's Common to Teversham will remain as Green Belt" (modification PM/SL/3/B).

(1) The SPD does not include land in the Green Belt for built development. However there may be a requirement for the playing fields associated with the school to be located in Green Belt land. As per the modification proposed to the Cambridge Local Plan, development in the Green Belt will only be approved in accordance with green belt Policy in the National Planning Policy Framework (CLP policy 4).

As stated in the proposed modification to CLP policy 12 (Cambridge East) "As an exception to policy CE/6 of the Cambridge East AAP, the secondary school need not be included in the local centre" (para 3.18). In common with practice elsewhere around Cambridge and in line with national policy on Green Belt, it will be acceptable for school playing fields to be located in the retained Green Belt" (para 3.18).